California: Big Government Cannot Save You 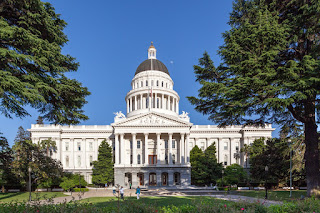 The Failed Promises of the Socialist Utopia

California state government is a perfect example of socialism gone amuck, the failures include: the huge Health and Human Services budget, underperforming schools, the state's role in the Student Loan Crisis, businesses (employers) leaving the state, ridiculous infrastructure spending, the demise of agricultural production, and the wildfire crisis. This list is not all inclusive, there many more programs in which centralized control has failed the citizens of California.

In its simplest form, Third Party Return of Voted Ballots, a.k.a ballot collection, is the collection of absentee and mail-in ballots by another individual, not a member of the voter's household. The collector is then responsible to deliver the collected ballots to county election offices or voting centers before the close of voting on Election Day.

The original intent of the ballot collections was to provide a vehicle to permit those unable to vote in person or lacked confidence in the mail-in process to submit their vote. Balloting collection was signed into law by Jerry Brown in 2016 and first used during the 2018 Mid-term Election.

The California Republican Party envisions a vibrant, prosperous and safe California defined by a robust and growing world-class economy, strong and healthy families, and reformed and responsive state and local governments that serve all people while protecting individual liberty. We are boldly confident about California’s future and hold dearly all that is good about California’s people.

After more than 50 years of Democratic Party control of the state government, California has regressed from the “Golden State” to having the worst quality of life in the nation. This has motivated many Californians to seek new opportunities in other states. In the last decade, a net of over one million people exited the state. Unless serious changes occur this exodus is expected to accelerate.

Republicans, as Americans, support our Constitution which is grounded in the assured protection of all law abiding citizens. We condemn anyone or organization that hates and seeks to harm members of any race, color, religious creed, national origin, political affiliation, ancestry, sex, sexual orientation, age, or genetic information.